Marmaris is a radiant vacation resort valuing a history that goes back to 12,000 BC. This port town nurtures beautiful forests of palm trees and deep turquoise waters spanning out in front of it. Marmaris bewilders the tourists with its splashy wharf.

The ancient times have left back smatterings of civilizations that once put down their roots in this city and ruled during their time. The excavation work has brought out the traces for present-time people to discover more and get acquainted with the history.

The people who have visited Marmaris believe in the phrase: “You Haven’t Lived Until You’ve Blue Cruised the Aegean and the Mediterranean!”

Blue Cruise Tours refer to traversing the amazing Turkish Turquoise Coastline on the gulets. The tranquility and distinctiveness of this experience would make you plan another trip to the Mediterranean and the Aegean.

Jeep Safari:
Jeep Safari is an absolute delight for the adventure-seeking tourists. Running through the splashy waters and the dusty trails, this ride would not just thrill you but let you enjoy the gorgeous views, beautiful waterfalls and bays.

The experienced drivers will take you through the scenic magnificence of Marmaris and you may go to the villages where you’ll see the people dressed up traditionally, riding their donkeys while the women would cook Turkish food for you in lunch. Stop by at the beach and take a swim if you desire or keep going through the rugged paths and lush pine forests, you will love it all laong.

Scuba Diving:
No diving experience required! Yes, that’s right. Marmaris diving adventure is for beginners as well as the experts. You will be given detailed instructions at the diving center and short demo dives to prepare you for the experience. After that you are ready to dive into the warm and crystal clear blue water to explore the life underneath the sea surface. This day is going to be unforgettable. 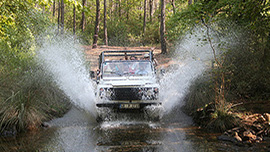 Turkish Night:
The jovial night enriched with Turkish culture welcomes everyone to be a part of it where all the Turks flock and enjoy all together. The traditional Turkish food and the folkdance are a staple of this night and one of the places where you would experience Turkish hospitality and warmth the most.

Swim with the Dolphins:
Have you ever wanted to spend time in the company of these friendly creatures? This wish will come true in Marmaris and imprint magical memories for you. Marmaris has a dolphin center that stays open throughout the year but this is something very high in demand so make sure to make a booking 3 days in advance. Shake the flappers, play with the dolphins and take pictures, this recreation is something that children and elders enjoy equally.

Turkish Bath:
Do not wait till the end of the trip to indulge into this addictive delight. Involve in it in the early days of your vacation and you’d want it again and again. Turkish baths are open throughout the day and it is an amazing way to get your body ultimately cleansed and massaged.

The welcoming staff and the professional masseuse assigned to you would guide you from one bath ritual to the next. This involves a steam room, scrub and soap massages on a raised marble platform, showers and aromatherapy. The calm and relaxation in the end is something you might never have experienced before.

Take a swim with the dolphins or plan a jeep safari, indulge in the town activities or dive deep in the sea, this exceptional resort is sure to become your most-favorite holiday spot in its own class. 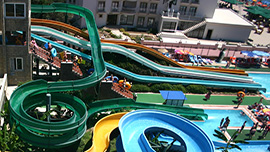 Dedicate a few days of your trip to get involved in history while you sightsee the ancient shrines in the age-old cities of Loryma, Saranda, Hydas, Erine, Euthenna, Physcos, Amos, Cedra, Castabus and Bybassios.

Marmaris Castle:
In the Rhodes campaign of Ottoman Sultan Suleiman, this castle underwent certain enhancements but the Ionians originally established it. In the present day the castle operates as a Marmaris Museum bearing a huge collection of relics from the Byzantine, Roman and Hellenistic eras. Prolong your stay at the castle till the sunset and you’d be delighted to watch the sunlight fading on the castle walls.

Nirvana Cave:
Nirvana cave, that used to be a place of worship in historic times, is at a short distance from Marmaris on Heaven Island. The excavations followed by the extended researches revealed the presence of humans in the cave(dating back to 3000 BC). It’s located at the highest point of the island and the history-lovers would surely want to spend some time here.

The Archaeological Museum:
The history-lovers must visit the Archaeological Museum for it unveils the antiquities from different eras. Akshebe Mosque and Tomb,Suleymaniye Mosque, the Citadel Church, Alara Han and Castle are some additional must-see places of Alanya momentous for their historic and architectural feel.

Other historic testaments from the Ottoman period to add in the list include Ibrahim Agha Mosque, Kisayali Bridge, Hafza Sultan Caravanserai and Sariana Tomb. 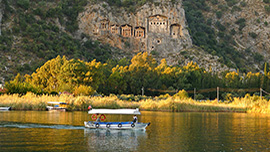