At the extreme western edge of the Bodrum Peninsula, 37 kilometers from the central Bodrum, you can locate the appealing fisherman’s inlet and coastal village of Gumusluk. Antiquity, fish, natural beauty and sunset best describe this place.

This conventional fishing village proposes to its tourists a relaxing opportunity to holiday in serene surroundings. With its rare vegetation, the alluring panorama with various chances for walking, trying out fish diners alongside the shore and sandy beaches, Gumusluk is an unforgettable spot for the vacationers.

Swim and Snorkel at Gumusluk Beach:

Gumusluk is distinguished for its medley of fresh fish eateries. A lot of these restaurants are huddled nearby the harbor area. But endeavor further to discover what more Gumusluk has to offer.

Just tread past the smidgens of pensions and beachfront restaurants to the other end of the beach, and you’ll find people involved in enthralling water sports. Underwater netting barriers the beach to form a secure sanctuary for snorkelers and swimmers, and guards you from any boats that arrive the bay. It’s exciting and relaxed to whirl out to the net where the water is deep enough that the bottom is not visible. Chill out here for a timeout, and observe the boats cruising indolently through the Aegean.

Windsurfing:
Ramble to the extreme end of the beach, and you’ll find a place where you can rent out gear for windsurfing. Choose the morning time for this sport if you are a beginner because the wind blows up speedier as the day goes on.

After spending a day indulged in adventurous sports, retreat opposite to any of your favorite restaurants that dot the beach and you’ll be served with refreshing beverages and food while your loafing hours.

Do not be hasty to leave as the sun begins to slide down the horizon – the sunset view from Gumusluk is gorgeous. 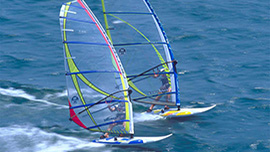 A brunch in the Byzantine Monastery:

Every Sunday, a brunch is arranged in the ancient Byzantine Monastery in Gumusluk. It’s a private property and the tenants who live there run this attractive little place as a café and exhibition hall.

Monastery is located somewhat in the hill, nearly 200 meters from the gravel beach. Both foreign and Turkish travelers love to stopover at this small village at the crown of the Bodrum peninsula for lunch or to dine in while watching the mesmerizing sunset.

At times, Turkish music artists come and play their much-admired tunes.
The bright blue tone of the sky and sea fusions with jazz tunes and mixes with the delectable meals to create an absorbing ambiance.

Famous Turkish personalities like movie directors and business executives also drop by to appreciate this lovely rapture. Paintings by the prominent Turkish painters adorn the inner walls of the monastery.

You would be absolutely delighted to spend a few hours of your time in this elite Turkish atmosphere.

Explore the Rabbit Island:
If you wish to touch history under your feet then you must visit the Rabbit Island – reachable by a partly historic dipped walkway, which was constructed during the Hellenistic period.

Once, King of Halicarnassus Mousolos and his beloved Artemisia used to visit the Rabbit Island. The causeway was created to easily reach the Rabbit Island and feed the rabbits living there. It was a pleasure for the King to view the exceptional sunset with his adored Lady.

It is feasible to wade to the island since the water it is just knee-deep. You may hike up to the topmost of the island, capture images of the beautiful backdrops, bask or dive into the pure blue waters of Gumusluk and swim over the wrecks close to the island.

A credit to its archaeological worth, Gumusluk is shielded against modern elaborations, and expectantly it would continue to be as far-off, picturesque and appealing in the future. It escalates in lure in the evening, when the locals pick their desired dining spot lining the sea front, presenting an extensive selection of locally caught seafood.

The westerly facet of Gumusluk offers some amazing sunsets; hors d'oeuvre in hand heeding to the reminiscent sound fishing boats chugging their way into the marina is an indulgence never to be missed. 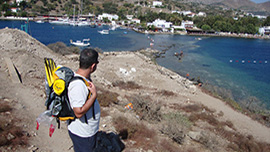 The history of Gumusluk dates back to the 2nd century BC with its independence noted in the year 196 BC.

The city underwent a massive earthquake and major excavation work was done in 2006. The smidgens of the earthquake can be perceived both on the East harbor, whose architectural fragments drowned in the water, and on the city walls, which are conserved in present.

The word Gümüs means “Silver” in Turkish. It’s not known why Gümüslük is named so but some locals say that it is because of the history of Mydus when the city used to be really prevailing and started to mine and mint its own silver coins. It’s also believed that it is due to the scene of ‘yakamoz’ (reflection of the moon on the water) turning the water in the bay stunning silver.

The earthquake has left much of the relics meters underneath the ground but strolling these sites makes quite an amusing thing to do for the region’s beauty and history.

It is an admirable point – a peculiar village with great seafood restaurants besides the waterfront and beautiful views as an incentive for trekking a nearby hill overseeing some of the remains of olden Myndos.

Ephesus – Day Trip from Gumusluk:
This is a must-do during a holiday in Turkey and because of heat visit during the months other than July and August.

Ephesus is a well-conserved old city on the Mediterranean; you will feel vibes of what life was like during Roman era. Prior to the silting up of the port it served as a planned coastal doorway to the Eastern World, which later expanded to be the second largest city in the Roman Empire, the location of a Christian monument, and one of the seven wonders of the antique world. More spectacles include 25000-seated arena, the marble-paved Arcadian Way, Library of Celsius, the Agora, various temples, water fountains and houses. 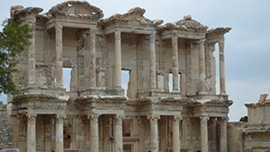