We are sorry, this accommodation is not available to book at the moment

Historical treasure of Dalmatia, its traditions, culture and customs prevail in the ancient stone villas that stirred up by winds, sun, sea and salt. They hold extensive blustering historic heritage of life in this region of Croatia.

The villa is titled after the archaic Greek name of Zadar, Idassa that used to be the Greek variant of Liburnian settlement that later developed to be the present town of Zadar. District Diklo is revealed in the Roman era as a heaven-like destination for recreation of prosperous rulers and rich landlords. Diklo symbolizes a testament within which reside striking tourist urban spots and serenity that is discretely realized in country houses.

Villa Idassa is a deluxe accommodation that was constructed in the later eighteenth century. It is one of the most genuine designs of customs and an evidence of the ancient times in this region. It went through an extensive renovation that got completed by the year 2013, perfectly conserving the cultural and historical assets. It signifies a flawless merger of Mediterranean architecture and contemporary design involvements in the outlook and the interior.

Fashioned out of typical Dalmatian stone, you will begin to feel a distinctive character and a very pleasant ambiance right at the door. On the ground floor there is a tavern, a staple place of every authentic Dalmatian house where entertainment and socializing is intended in a pleasurable aura. There’s also a patio lined with old bricks, and harmonized by green spaces and plants.

The first floor has three bedrooms, a living area and a fully equipped kitchen where every little detail has been taken care of to fuse with the Dalmatian atmosphere. The interior radiates the feel of relaxation that is perfect for spending unforgettable time with your family.

Distances to the Nearby Locations 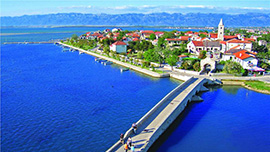