This luxury and magnificence boutique hotel located in Torremolinos surrounded by white villages is just at a 6-minutes walk from the beach.

The hotel features 36 rooms on 3 floors and each room is air conditioned with lavish interiors. The hotel provides modern luxuries in each room where guests can experience the utmost relaxation and comfort.

The hotel is in the close proximity of many basic facilities including Torremolinos hospital and train station. The popular landmarks near this hotel include Malaga Botanical Garden, Cathedral, Picasso museum, Carmen Thyssen museum and Andalucia Technological Park.

Halal food is available in the hotel. 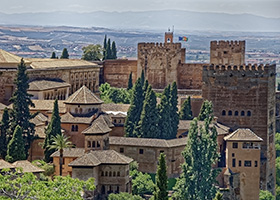 Andalusia, originally written as ‘Andalucia’ in Spanish, as a whole means ‘to walk easy’. It has been derived from sub-Spanish words Ande, which means ‘to walk’ and Lutier, meaning ‘easy’.

Andalusia is one of the largest autonomous regions among the 17 regions with diverse cultures and geography in Spain. It is the southern-most region of the mainland Spain, including 8 provinces with capital cities of the same names as the provinces themselves: Huelva, Sevilla, Córdoba, Jaén, Cádiz, Málaga, Granada and Almería.

Andalusia as a whole is a region of contrasts with hills, rivers and farmland which borders Spain’s southern coast line. It has ancient cities and deserts, some amazing beaches along the Costa del Sol and Costa de la Luz and the remarkable Sierra Nevada mountain range where the highest mountain in Spain is found, Mulhacén with an elevation of 3,479 m. Being the part of Sierra Nevada range in the Cordillera Penibética, it is the highest mountain in mainland Spain and the Iberian Peninsula. Andalusia also houses the most southerly ski-resort in the entire Europe.

Andalusia is separated from Morocco by the Strait of Gibraltar; to its south is the self-governing British oversees territory Gibraltar; to the east is the Mediterranean Sea; to the west is the Atlantic Ocean and to the north Sierra Morena constitutes the border with the Meseta Central.

Andalusia houses the hottest and driest summers in Spain. But on its west side, the weather systems which sweep in from the Atlantic side ensure wet winters, where some areas receive copious amounts of rainfall. As a whole, by comparison to the rest of Spain, the region enjoys an above average yearly rainfall.

In Bolonia Beach, Tarifa there are some hidden coves for naturists, for kite surfers some strong easterly winds (Levante), and also some lined with excellent chiringuitos which are best for families with kids experience.Sierras de Cazorla (Natural Park) is the best place for walking or biking along its well-marked trails. It gives an exhilarating experience as the scenery changes dramatically, from deep, luxuriant river valleys to peaceful mountain meadows, magnificent waterfalls, and crumbling hilltop castles.Bullfighting is a traditional sport in Spain and one of the defining cultural characteristics of this Iberian nation. Its season lasts from spring through autumn.

Andalusian emblem, the most important feature in its history, consists of the figure of the mythical Greek hero Hercales (Latin: Hercules), son of god Zeus and mortal Alcmena. Appearing between the columns Hercales is seen seizing and taming two lions, each representing the power of animal instinct, is a representation of the legend: "ANDALUCÍA POR SÍ, PARA ESPAÑA Y LA HUMANIDAD". The two columns are joined by an arc with the Latin inscription: "DOMINATOR HERCULES FUNDATOR".The emblem saw its origin in an agreement made by the pro-autonomist Assembly of Ronda in 1918, designed by Blas Infante, "Father of Andalusia". According to Blas Infante, the invention of the emblem cannot be seen as meaningless, but it is a series of modifications of the traditional elements of Andalusia: "We, Andalusian regionalists or nationalists, have not come to invent anything new. We had simply recognised, in our action, what the people created on its own, hence giving due value to its history ".Andalusia’s heritage dates back from the Roman Empire to the Moorish rule in 8th-15th centuries. Andalusia’s legacy and history can be seen in the light of its architecture, which includes some remarkable landmarks such as in its capital city and others as the Alcázar castle in Seville, Córdoba’s Mezquita Mosque-Cathedral and as well as the Granada’s Alhambra palace. Andalusia is also knows as the cradle of passionate gypsy form of art encompassing music and dance.Andalusia's trademark food is Gazpacho Andalusia; a cold soup or liquid salad made with fresh and raw vegetables. Probably derived from a Roman dish, in one form the dish dates back as far as the country itself.
Read more